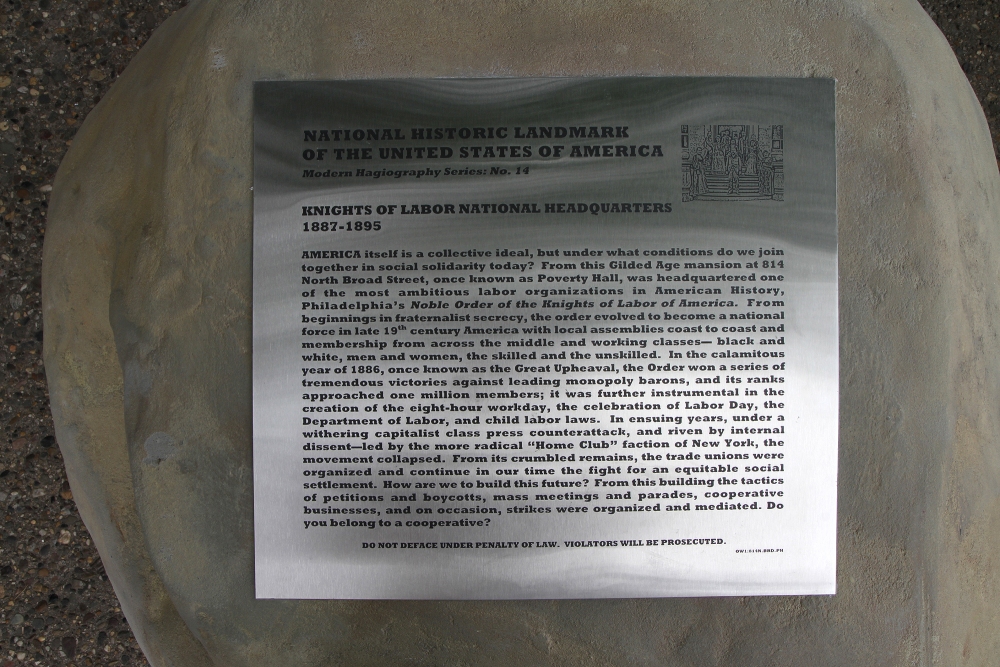 This project was composed of the extralegal installation of a monument at 814 North Broad St, Philadelphia. After a great degree of research, I discovered that this building was once the site of the national headquarters of an organization called the Knights of Labor-- a seminal American labor union of the late 19th century. No plaque bore its name, this history had become buried, so this project was an unearthing of the history, written in the elemental forms of nature itself. The boulder monument was accompanied by a triangular shaped gallery in the Institute of Contemporary Art of the University of Pennsylvania in conjunction with an exhibition there. The gallery featuring two dueling historical archives displayed on two separate tables-- one of material culture related to the Knight's membership and cause, and the other of the monopoly press counterattack that sought to discredit the organization. Within the presented archives were numerous blank spaces exemplifying the history as a fragmentary ruin. In the center of the gallery were two front doors of the same gilded age period that were (astoundingly) chopped up and discarded as trash by a contractor renovating a house in Brooklyn. The were placed in the center of the gallery as a kind of elegiac memento mori for political memory.

The intervention sought to recover this vital piece of American Labor history through the emplacement of the ponderous boulder monument and accompanying plaque- meant to look completely normative and official.

The project's title: "Passing the Veil: of tXX XXXXXXX XX XXXXX" is a reference both to the Knights of Labor (KOL) early quasi-Masonic initiation ceremony, where the outer veil was the larger world, and the inner veil the space of solidarity, with Passing the Veil, being an entering into the organization; as well as the process of passive forgetting and active erasing that characterizes American labor history, so instead of "Passing the Veil: of the Knights of Labor," the title is blacked out or lost, thus: "Passing the Veil: of tXX XXXXXXX XX XXXXX." For who among us has ever heard of this arcane group? Yet in the 1880s, the were already creating a labor organization that would admit all races, men and women, the skilled and unskilled. They rose to nearly 1,000,000 members through locally organized hall, before collapsing under a massive counteractive of combined monopoly and church power. From their ruins the much less ambitious labor unions of IWW, AFL and CIO were later organized, but with barriers of class, race and gender reinstated.

The intention at the museum site was to create an installation that expanded the gesture of the monument and reframes the KOL's potential relevance to the present, displaying the two dueling archives: scathing anti-labor lithographs versus labor tracts, dance invitations and keepsake photos as two possible historical readings, and opening the door to a further question: how could such history have become lost, and what limits or kindles in the viewer a sense of identification-- the possibility of "joining," that activates any popular movement. In the KOL's egalitarian fraternalism, is there a model for the Occupy age?
PASSING THE VEIL: OF THX XXXXXXX XX XXXXX
Loading...