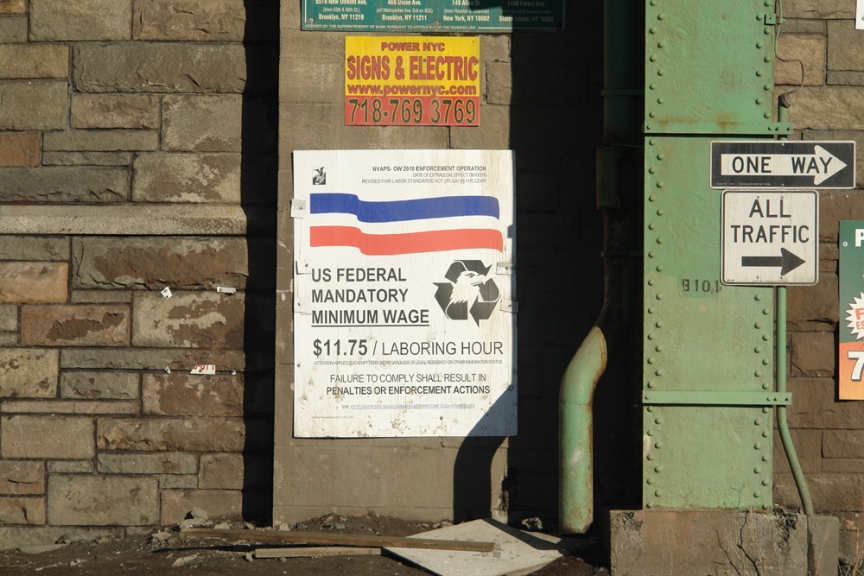 Mandatory Minimum was an extralegal sign intervention and documentation project installed on the underside of the Gowanus Expressway in Brooklyn. The sign announces (with fictitious authority) that the federal minimum wage is actually $11.25 per hour instead of the actual starvation wage of $7.25/hour. The sign faces the parking lot exit of a Home Depot home improvement store, where free laborers often gather looking for small off the books work from customers. The sign then was intended to create an illusion of a higher prevailing wage, thus giving more negotiating powers to the freelance workers.

Around the sign are other signs, illegally installed advertising home improvement services, creating a kind of growing coral reef of unauthorized advertising. Amidst this backdrop, the sign gains even greater power, appearing, bland, bureaucratic, official, and threatening.

The text of the sign warns darkly about penalties for lack of compliance and enforcement actions. A video piece was created afterwards by the artist interviewing the black market laborers in the parking lot as to their belief in the sign, and once the artist, informed them it was not in fact official, as to the efficacy of such politically inflected art strategies.

The Orange Work method might be summed up as: Be The State, by appropriating visual languages to contest issues of spatial dynamics.